You are here: Home » About Us » History of NISOA 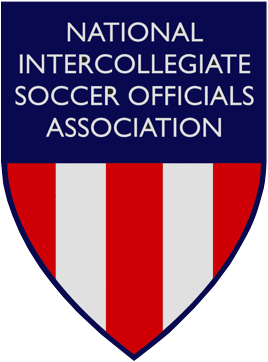 The referee system (dual system of control) was adopted until a change to the Diagonal System of Control (DSC) with one referee and two linesmen was adopted in the late 1970’s.The present NISOA Badge was designed by Larry Briggs of Massachusetts and Jimmy Walder of Philadelphia. Larry King of Missouri designed the NISOA flipping coin. A Code of Ethics and a Mechanics Handbook were printed in 1965 along with the first mimeographed NISOA Newsletter for each member. Member dues were set at $1.00.

Membership application was formalized in 1966 when President Larry King asked Ray Bernabei to get involved as the NISOA National Examiner. Local chapters, Regional and State Boards were formed in 1967 along with a new Constitution. While membership grew to approximately 700 by 1968, 32 Test Centers were established throughout the United States. Prior to that, NISOA was primarily an “Eastern Region” dominated organization. With eight Regions adopted, local chapters took on a new meaning for intercollegiate soccer referees. The first NISOA National Clinic was conducted in 1970 at Ohio Wesleyan. It was also the beginning of high technology where closed circuit TV was used to observe officiating techniques at clinics throughout the United States. Referee uniform attire began to change in the 1970’s and NISOA began making inroads with the various soccer organizations, such as NSCAA, NCAA, NIRSA, NJCAA, NCCAA, and their tournament committee process.

The years of 1973 and 1974 saw the greatest action within the NISOA when Ray Bernabei, President, presented the first five year long range plan. Included in the plan were the following: NISOA Annual Convention, National Entry Exam Standards, President’s Annual Report, Referee Game Report Card and Ejection Form, International Exchange Program, NISOA Policy Manual, Computer Membership Roster, Grievance Procedure, Fiscal Management and Control through Zero-Based Budgeting, National Academy for Referee Training to include a referee’s training camp, Clinician Training, Assessor Training, Referee Awards and a Standardized Teaching and Curriculum Model Based on the Ralph Tyler Curriculum Model devised in 1954 and presented by Robert Sumpter, Materials Development Program to include slides, overheads, and videos. Also included were Staff Leadership Development Workshop Seminars. In 1975 Jack Schrumpf, President, appointed Ray Bernabei as NISOA’s first Executive Director. From 1973 through the mid-1980’s NISOA was on a roller coaster to professionalism, positive image development, recognition and a proactive force in intercollegiate soccer. With a cosmopolitan staff of volunteers, NISOA made its mark throughout the world including England, Italy, Russia, Ukraine, and Argentina. NISOA’s mission was and continues to be a “service organization” to its members and the educational institutions.

By 1994 NISOA made history by celebrating its 30th birthday by honoring all of its past presidents and Honor Awardees at its Annual Convention in New Jersey. Every member who registered received a commemorative NISOA logo wristwatch and many other items that were donated. Also by 1994, NISOA no had 117 local chapters located in 47 states with 3515 members. Any female or male 18 years or older is eligible to join NISOA. Thirty-four years later (1997) NISOA reached its long-range goal of having 50 states included in the National Organization with 120 Chapters and 3900 members. Prior to reaching its goal, NISOA was appointed by the National Federation of State High School Associations (NFSHSA) to serve as its training agent for High School soccer referees. Approximately 140 Clinicians have been trained for High School soccer referee training.

The year 2000 marks some of the most significant milestones in the history of the organization. On April 29, NISOA unveiled its Hall of Fame Members in the National Soccer Hall of Fame at Oneonta, NY. The display area is a “dream of reality” due to the work of Charlie Lee, who devised the Baker’s Case displaying the NISOA memorabilia and artifacts, to David Cymerman, who masterminded the interactive computer system, and to Ray Bernabei who coordinated the kiosk containing the College Referee Uniforms from 1949-2000 and the collage of pictures illustrating the NISOA Service Programs. Several other milestones are the certifying of 400 National Referees, the production of the NISOA Manual and the NISOA Assessment Manual distributed to all chapters. Membership registration reached 4,400 college members in 123 Chapters and 600 high school members.All of the above was made possible because of the numerous volunteers who contributed to the Goals and Objectives of the organization. Approximately 230 staff continue to serve as the driving force. Two leaders who served in the background those years and who played a very influential impact role were Robert Sumpter and Mario Donnangelo. During the National Convention in Las Vegas, Bob Sumpter and Dan Keohane led the first assignor discussion session.   This program moved forward in 2001 with the first Assignor Workshop in Orlando, Florida  and opened the dialogue between conference and local assignors.  These workshops are now held every other year and strengthen the relationship, interaction and professionalism of all assignors.

The year 2005 saw the advent of the Rules Comparison Guide.  This project spearheaded by Don Dennison helps the membership recognize the differences in rules/laws when moving from the intercollegiate game to the high school game or other soccer venues.  This was also the initial publication of the Pre-season Guide by John Van de Vaarst and Frank Jewell.  In 2006, an agreement was reached with Referee Magazine to publish the guide and it continues on an annual basis.  In addition, the first mentor training DVD was distributed to chapters.  This was updated and redistributed in 2010.  In 2006, a series of annual studies to analyze the completed assessment forms commenced with the aim of using study results to design future curriculum for all levels.

The year 2007 was a landmark when NISOA surpassed the 5,000 membership level.  Chapters in each state continued to recruit and develop new members and the organization became even stronger.

2008 brought a major transition to NISOA.   Dr. Raymond Bernabei, Executive Director, talked about a restructure during the convention in Bethlehem, PA.   Then suddenly in September, Dr. Bernabei passed away.   Although he was lost physically, his plans and goals continued to move forward.   A reorganization took place and John Van de Vaarst accepted the role of Director of Operations and Mario Donnangelo took on additional responsibilities as Associate Director.   The reorganization was competed when in June 2009, Cliff McCrath was appointed as Executive Director with responsibilities for liaison with outside organizations and fundraising.  During this same time period a new web master was appointed and the NISOA web site took on a more professional look with a great amount of data.  During this time monthly instructional articles on the intercollegiate, interscholastic and nuts and bolts also were established for publication on the web site. The organization quickly took shape but then hit another setback when Mario Donnangelo passed in April 2010.  Once again the duties were realigned and Tom Richardson stepped up and accepted the position of Associate Director for Membership and Awards.

In 2010, NISOA partnered with the NCAA and ArbiterSports so that all members have access to the NCAA/Arbiter web site at a far less cost than other sports officials.   This will result in access to on-line training and other benefits.  Don Wilbur was selected by the NCAA to become the Director of Assigning for playoff games.   NISOA continued to work closely with him to provide the best possible officials for post game assignments.

All of the above became a reality because of the numerous volunteers who contribute to the goals and objectives of the Association.  As the only national soccer referee organization exclusively officiating for schools, NISOA continues to be a leader in soccer officiating and training techniques.

In 2011, NISOA established a virtual Hall of Fame on the web site.  The National Soccer Hall of Fame closed its doors in 2010 and NISOA quickly adjusted and began holding the inductions at the National Convention. The virtual Hall of Fame allows individuals to review the biographies of the current Hall of Fame members and to see pictures of NISOA history.  Also in 2011, Manuel Ortiz, Jr was elected as president.  One of Manny’s goals was to bring diversity to the Executive Board.  To help meet this goal Manny appointed a minority female as regional representative to Region IX.  This was the first time a female served on the Executive Board.  A short time later Manny appointed a minority to serve as regional representative to Region XI.  Manny was also able to produce the first Spanish language entrance examination.

Also in 2012, NISOA introduced the green uniform as an additional option for officials.  This uniform was worn at the NCAA Division I Men’s and Women’s Championships.

The National Referee Program was reorganized in 2012 and became the National Referee Academies were established.  This allowed NISOA members to become part of or renew their registration as a national referee on an annual basis.  One day academies were held at various locations with an emphasis on play situations from the previous season and how these plays should have be dealt with during the game.  Additional sessions were held on topics germane to the national referee.

NISOA celebrated its 50th anniversary in 2013.  The highlight of the celebration was the annual convention held in Englewood, CO.  The Colorado chapter did an outstanding job in coordinating the program with the anniversary planning team.  Thursday night was an extra special evening when NISOA remembered the past by hosting a reception for past presidents, past honor award recipients and hall of fame members.  All convention attendees were invited and attended the event. The evening included short presentations made by members of the Bernabei, Donnangelo, and Jewell family members.  The evening concluded with a DVD tribute that summarized the 50 years of NISOA.  A special thank you goes to John Kipp, Ohio who edited the DVD and added the very special background music.  Copies of the DVD were given to those that attended and a copy was sent to each chapter.  All who registered for the convention received a special 50th anniversary ring.  The auxiliary members in attendance received a necklace containing the auxiliary logo.

One of the goals set by President Todd Abraham for 2013 was to make the Executive Board more accountable and increase the administrative rigor into the organization.  The board worked as a team to develop a RACI (responsibility, accountability, coordination, information) spread sheet which clearly defines which position is responsible for a particular task and which other positions need to assist or be informed.  This eliminated overlap and gaps in the administrative process.

The National Referee Academies were refined in 2013 and the clips shown had standardized decisions included.  This helps with consistency in officiating throughout the country.  In addition to the national referee participating in the academies, approximately 600 NISOA members audited the program.  This was a great step forward in improving the overall quality of officiating.

Our programs are constantly being reviewed and updated to match the modern college soccer game. In 2016, NISOA hired Julie Fabsik-Swarts as our third, permanent Executive Director to lead us in improving our business practices and make sure we can meet the needs of our members and the college soccer community.